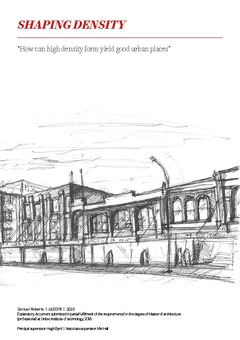 PROJECT OUTLINE: Recently, the Government has purchased 29.3 hectares of Unitec Land within the Wairaka precinct. The proposed number of houses aimed to be built on this land has been described to be between 3000-4000 dwellings. This lays the foundations for a very high-density urban development of approximately 130-140 dwellings per hectare. However, the actual numbers depend on a variety of inconsistent forces, such as the changing socio-political and economic climate and how these will modify the existing site. What makes this announcement ideal for the scope of this project can be summarized by both the virtue of the location, and the nature of the announced project. Using this site, the project will develop a proposition for an urban plan representative of the research and studies expressed in the content of this document. It will show how this plan is manifested at two scales, the conceptual system and the urban scene. ABSTRACT Historically, the streets of cities have been the epicenter where public life takes place. They have provided democratic spaces which were important for many social, economic, leisure and political activities. Many of the ideas we consider to be contemporary urbanism were established, or rather re-established, from a collective frustration concerned with the destruction of cities under modernist planning techniques and the shaping of form around the automobile. Characterized by a separation of function, suburban sprawl and auto-motive dominance, the continued attrition of these planning principles led to the destruction of communities and public spaces. These conditions have been the cause of many of the poor conditions we see today, with the urban form of cities being linked to such issues as obesity, poor mental health, crime and loss of productivity. Criticisms of the planning ideologies occurred primarily over the second half of the 20th century and paved the way for what we know today as urban design or contemporary urbanism, characterized primarily in the works of Jane Jacobs: “The death and life of great American cities". In its wake, the most important questions and ideas of contemporary urban design were established. Many of the principles revolved around the idea that a city should first and foremost prioritize and serve the needs of people and their habitats. It should support and enhance our physical and social behaviors. It should nurture community, walkability, amenity, social interaction, life and activity. Environments should engage the inhabitants and enhance the experience of those contained within its fabric in much the same way as good architecture enhances the lives of its dwellers. These ideas are inspired by the virtues found in historical city models and in contemporary manifestations. They have proven that the forms of older cities are equally effective today as they have been for millennia. This project is an exercise in the shaping of good urban conditions, towards an improved city fabric that enhances life and experiences within the city. It aims to experiment with the compositional value offered in contemporary urban planning theory, strategies and practice, as a means to explore how the creation of form can be engaging, questioning how this applies and materializes into the modern urban forms of Auckland to create engaging urban conditions. It will discuss how such forces that define these urban conditions can work to enrich life in Auckland under the increasing pressures of intensification, while demonstrating what can be done and how we can achieve it to ensure a better urban form for the future of the city in an outline of methodical strategies.