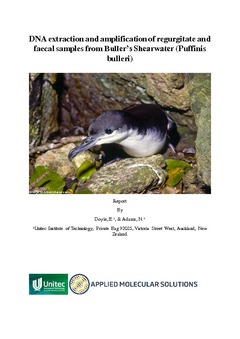 Research which aims to identify the prey items found in the diet of seabirds by analysing stomach contents, faeces, and other remains strongly biased towards detecting organisms which are slow to digest, while soft bodied prey may be fully digested and remain undetected. DNA-based methods of prey item identification have been used in a number of studies to address this issue. The intention of the current research was to test the feasibility of applying DNA-based prey item identification to analysing the diet of the Buller’s shearwater (Puffinis bulleri). DNA was extracted from 17 samples of regurgitate and faecal material collected from Buller’s shearwaters, received from the Northern New Zealand Seabird Trust. Following DNA extraction, PCR amplification is used to selectively amplify short sections of the 16S gene which can be used for identification. PCR products were run on an agarose gel, as a success/fail test for amplification. Only one of the DNA samples tested could be amplified. While this result suggests that DNA-based analysis may not be suitable for research on the diet of the Buller’s shearwater, the outcome may be due to the small scale of the test.