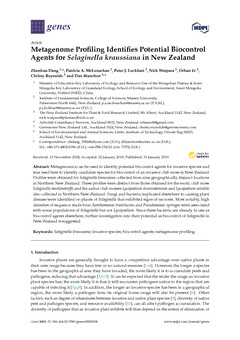 Metagenomics can be used to identify potential biocontrol agents for invasive species and was used here to identify candidate species for biocontrol of an invasive club moss in New Zealand. Profiles were obtained for Selaginella kraussiana collected from nine geographically disjunct locations in Northern New Zealand. These profiles were distinct from those obtained for the exotic club moss Selaginella moellendorffii and the native club mosses Lycopodium deuterodensum and Lycopodium volubile also collected in Northern New Zealand. Fungi and bacteria implicated elsewhere in causing plant disease were identified on plants of Selaginella that exhibited signs of necrosis. Most notably, high densities of sequence reads from Xanthomonas translucens and Pseudomonas syringae were associated with some populations of Selaginella but not Lycopodium. Since these bacteria are already in use as biocontrol agents elsewhere, further investigation into their potential as biocontrol of Selaginella in New Zealand is suggested.

This is an open access article distributed under the Creative Commons Attribution License which permits unrestricted use, distribution, and reproduction in any medium, provided the original work is properly cited. (CC BY 4.0).