Facebook, fickleness, and the new populism in the Philippines : assessing Facebook’s role in Rodrigo Duterte’s 2016 presidential campaign and rise to power 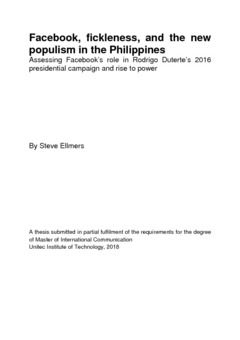 Ellmers, S. (2018). Facebook, fickleness, and the new populism in the Philippines: Assessing Facebook’s role in Rodrigo Duterte’s 2016 presidential campaign and rise to power. (Unpublished document submitted in partial fulfilment of the requirements for the degree of Master of International Communication). Unitec Institute of Technology, Auckland, New Zealand. Retrieved from https://hdl.handle.net/10652/4592

SUB-QUESTIONS 1/ How was Duterte’s image as a candidate constructed through his official Rody Duterte Facebook profile and DU30 for 2016, a representative Facebook account of the hundreds managed by his campaign team? 2/ How did influential figures within the Philippine political and media elite abet Duterte’s rise? Although the Philippines’ populist strongman Rodrigo Duterte is often called the Drumpf of the East his unexpected victory in the 2016 Philippine presidential election has created such a bloody legacy that Duterte’s impact may even outlast his namesake’s. Duterte’s rise to power occurred in the country with the world’s heaviest Facebook users and relied on this social media platform to a far greater extent than any candidate had during the 2010 Philippine presidential contest. This development determined that Facebook would be the main subject of this analysis. This research analyses what happened during the 2016 Philippine presidential election campaign by examining the role Facebook played in Duterte’s success from when his candidacy was formally approved on December 17, 2015, through to the presidential election on May 9, 2016. It subjects two key Facebook accounts, Duterte’s official page and a representative example of one of the hundreds created to support him, to content and discursive analysis. It places Team Duterte’s use of Facebook within the overall context of the campaign and shows how Duterte’s complex and contradictory identity as a candidate was constructed for two very different Facebook audiences. This research also considers how Duterte’s rise was linked to the assistance he received – either intentionally or otherwise – from other members of the Philippine political and media elite. In contrast to his official position as a vulgar yet ultimately non-threatening change agent Duterte’s diehard Facebook activists and their networks of fake Facebook accounts revelled in distributing blatant utopian messaging. This contributed to Duterte’s dominance of the political discourse of the campaign and exploited the Philippines’ messiah complex. It helped Duterte present himself as a Christ-like saviour; the country’s last hope, the Philippines’ last card. As a result, this research also examines the parasocial relationship between Duterte and his supporters. This is because their belief that they knew who Duterte was and that he could be trusted with imposing a new dictatorship has allowed Duterte to unleash what he considers to be the final solution to all the Philippines’ problems – the violence which he previously used as a local warlord to pacify the most chaotic and ungovernable city in Asia.

160606 Government and Politics of Asia and the Pacific, 2001 Communication and Media Studies