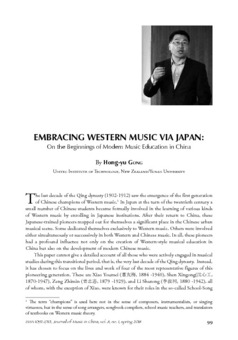 Gong, Hong-yu. (2018). Embracing Western Music via Japan: Chinese Intellectuals, Japan, and the Beginnings of Modern Music Education in China. Journal of Music in China, Vol. 8, No. 1, 99-134.

The last decade of the Qing dynasty (1902-1912) saw the emergence of the first generation of Chinese champions of Western music.1 In Japan at the turn of the twentieth century a small number of Chinese students became formally involved in the learning of various kinds of Western music by enrolling in Japanese institutions. After their return to China, these Japanese-trained pioneers mapped out for themselves a significant place in the Chinese urban musical scene. Some dedicated themselves exclusively to Western music. Others were involved either simultaneously or successively in both Western and Chinese music. In all, these pioneers had a profound influence not only on the creation of Western-style musical education in China but also on the development of modern Chinese music. This paper cannot give a detailed account of all those who were actively engaged in musical studies during this transitional period, that is, the very last decade of the Qing dynasty. Instead, it has chosen to focus on the lives and work of four of the most representative figures of this pioneering generation. These are Xiao Youmei (蕭友梅, 1884 -1940), Shen Xingong(沈心工, 1870-1947), Zeng Zhimin (曾志忞, 1879 -1929), and Li Shutong (李叔同, 1880 -1942), all of whom, with the exception of Xiao, were known for their roles in the so-called School-Song movement.2 Although these four Chinese intellectuals shared a common scholar-gentry family background, early Confucian upbringing and a Westernized modern Japanese education, by the time they returned to China their careers had evolved in substantially different directions. Thus, Shen’s interests were almost exclusively in teaching and producing songs for school children; Zeng was known for his interests in Western music theory, his holistic approach to music education, and his advocacy of reforming Chinese music along Western lines; and Li – while his place in the annals of art history of modern China was undoubtedly due to his fame as an artist par excellence in the Renaissance sense – was also celebrated for his partiality for Schubert-style lieder (art songs) and his unsurpassed skill in composing lyrics to Christian hymn tunes. Xiao was different in that he was the only one among this pioneer generation who went on to pursue advanced study in the birthplace of Western music, Germany. Under the supervision of two of the most prominent German music theorists and musicologists, Hugo Riemann (1849-1919) and Arnold Schering (1871-1941), Xiao mastered skills in counterpoint, fugal writing, orchestration, and other compositional techniques, earning a doctoral degree in music education.