Missionaries and the beginnings of Western music in China : the Catholic prelude, 1294-1799 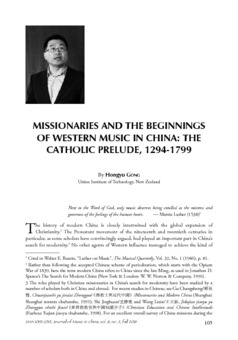 "Next to the Word of God, only music deserves being extolled as the mistress and governess of the feelings of the human heart" — Martin Luther (1538) The history of modern China is closely intertwined with the global expansion of Christianity. The Protestant movement of the nineteenth and twentieth centuries in particular, as some scholars have convincingly argued, had played an important part in China’s search for modernity. No other agents of Western influence managed to achieve the kind of penetration and geographical distribution in China as did the China missionaries. In a recent survey of works published on Chinese Christianity and China Mission, the veteran mission historian Jessie G. Lutz made the following remarks: "However unrepresentative missionaries in China might be of their compatriots at home, they represented the West for many Chinese. Missionaries, furthermore, came to China intent on effecting change. They brought heterodox religious doctrines and social values to China; increasingly, they became a two-way conduit for information and images of China in the West and for Western secular knowledge as well as Christian teachings in China. Although other avenues for cultural exchange opened up, missionaries remained important and available agents for knowledge transfer and change, eliciting both negative and positive reactions among the Chinese". Hence, a historical study of the place of Western music in China’s transition from tradition to modernity must start with an investigation of the musical activities of the China missionaries. Although the focus of the present paper is on the practical uses of Western music in China by the Catholic missionaries in the years between 1601 and 1799, for the sake of perspective, it will be useful to review the situation of Western music before the arrival of Mathew Ricci in Beijing in 1601. By tracing the beginnings of Western music in China in relation to its Christian carriers from the Tang dynasty to the reign of the Qianlong Emperor and examining the concrete ways in which music was used in the Christian enterprise, it aims to highlight the utilitarian undercurrent behind the missionary introduction of Western music.