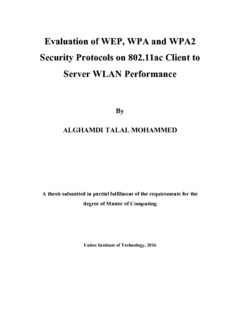 Mohammed, A. T. (2016). Evaluation of WEP, WPA and WPA2 Security Protocols on 802.11ac Client to Server WLAN Performance. An unpublished thesis submitted in partial fulfilment of the requirements for the degree of Master of Computing, Unitec Institute of Technology, Auckland, New Zealand.