The development of a palpation-based clinical assessment of breathing motion : a nominal group technique approach 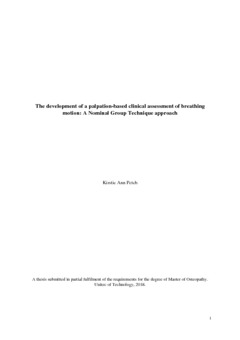 Petch, K.A. (2018). The development of a palpation-based clinical assessment of breathing motion: A nominal group technique approach. An unpublished thesis submitted in partial fulfilment of the requirements for the degree of Master of Osteopathy. Unitec of Technology, Auckland, New Zealand.

BACKGROUND: Dysfunctional breathing appears to be widely prevalent within the general population, negatively impacting the health of patients. Several palpation-based assessments of breathing have been described but associated research is subject to criticism. AIMS: To develop a palpation-based assessment of breathing motion, and to develop a simple notation format for clinical recording. METHODS: A Nominal Group Technique was employed. Nine participants (6 osteopaths, 3 physiotherapists) with an established interest in breathing assessment and management were recruited, and attended two group meetings. Group discussions pivoted around key questions (hand-hold, patient position, a combination of the two, and notation format). Participants individually ranked generated ideas in order of importance and the findings were collated. The generated assessment and notation was framed at the level of new graduates so the items considered most important in the palpatory based assessment of breathing should able to be performed regardless of clinical experience. RESULTS: The highest ranked handhold was the Hi-Lo, the highest ranked position was seated, and the highest ranked combination of handhold and patient position was ‘Seated – Upper ribs (over the shoulder to clavicle)’. “Cueing” of the patient and their breathing was a topic that arose during the course of discussion. The notation format that was developed consisted of listed items, with the Hi-Lo considered the most important of these. Consensus on how the notation should be marked was not reached. CONCLUSIONS: The main outcome of the study is a consensus-based description of what participants considered most important in the manual assessment of breathing, ranking ‘Hi-Lo’, ‘seated’ and ‘seated – upper ribs (over shoulder to clavicle)’ as the most important items in their respective categories.