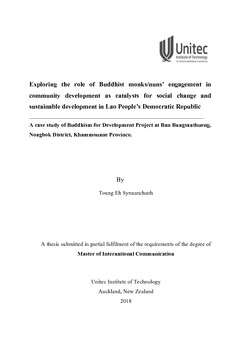 Synuanchanh, T.E. (2018). Exploring the role of Buddhist monks/nuns’ engagement in community development as catalysts for social change and sustainable development in Lao People’s Democratic Republic: a case study of Buddhism for Development Project at Ban Bungsanthueng, Nongbok District, Khammouane Province. A unpublished thesis submitted in partial fulfillment of the requirements of the degree of Master of International Communication, Unitec Institute of Technology, Auckland, New Zealand.

RESEARCH QUESTIONS: The following central research question forms the focus of this research: • What role can the BDP’s trained Buddhist monks/nuns play in community development as catalysts for social change and sustainable development in Laos? The followings are a set of sub-questions to answer the central main question above: 1. What aspects of participatory communication are manifesting in the community development initiatives implemented by the trained monk in Ban Bungsanthueng? 2. What sustainability and self-reliance goals has the community achieved as a result of the Buddhist development initiatives? 3. What challenges do the Buddhist monks/nuns experience in their community development practice in Ban Bungsanthueng? 4. How can the Integrated Model of Communication for Social Change [the Catalyst Model] be integrated with the Buddhist Approaches to Development? The significance of local and traditional beliefs and culture has been seen as an obstacle to modernity. In Laos, religious communities have often been excluded from the development process and identified as hindrances to modernisation. The significances of Buddhist values and the role of Sangha (Buddhist monastic order) are not addressed in the development process, although Buddhism is the main religion of Laos. Buddhism is widely understood as a separate body from social affairs. Society tends to view Sangha members who are involved in secular affairs as violating monastic disciplines (vinaya) and precepts (sila). Within this context, the Lao Buddhist Fellowship Organisation has established the Buddhism for Development Project [BDP] to train the Sangha, as well as Buddhist followers, to play a greater role in social development and changes in the broader social perception of the roles of Sangha in the development process, with an emphasis on spiritual development and transformation. This study, using a qualitative methodology, employed Buddhist development approaches [BA] as applied by the Buddhism for Development Project [BDP] (2012) and the Integrated Model of Communication for Social Change developed by Figueroa, Kincaid, Rani, and Lewis (2002) as a conceptual framework. It utilised participant observation, semistructured interviews and focus groups to explore the roles of Buddhist monks/nuns as catalysts for social change and sustainable development in the Lao People’s Democratic Republic. The research takes as a case study the Buddhism for Development Project [BDP] implemented at Ban Bungsanthueng (Nongbok District, Khammouane Province) by its Buddhist Volunteer Spirit for Community network [BVSC network]. The fieldwork took place at the BDP’s training centre in Vientiane and the Buddhist initiatives at Ban Bungsanthueng. The research indicates that BA aims at transforming villagers’ spirituality in order to liberate them from suffering caused by various social issues. The research demonstrates how the BDP and its network apply participatory approaches through interpersonal communication, such as sermon delivery, Dhamma talk, and daily interaction with villagers and project members. The trained monk through his leadership role and earned social trust enables the community to reach its sustainability and self-reliance goals. However, there are some challenges that the trained monk and project members face, such as power relationships iii with government and community officials. These challenges affect the free flow of information and group decision making. The emerging integrated framework has created new contextualised indicators combining the values of BA and IMCFSC. The monk here is seen as a Buddhist catalyst by acting as an internal stimulus to community development through spiritual transformation and social trust. BDP and its BVSC network approaches are considered participatory and act as a catalyst for social change. Buddhist ethics, virtues and moral teaching, especially the concept of ‘Paticcasamuppada’ (independence or inter-being), provide the stimulus for community dialogue and actions for change and spiritual transformation by having the Sangha as facilitators and transformers. The finding has demonstrated that BDP acts as the catalyst for change through educating the Buddhist community, changing the social perception of the social roles of the Sangha, facilitating a network of Buddhist volunteers, and mobilising funds to support grass-roots initiatives. The authoritative position, social respect, trust and faith in the Sangha, as well as the collective consciousness (ownership) of the Wat facilitate community responsibility, solidarity and harmony‒significant social capital‒that are the cohesive force for community participation in dialogue and concerted action. The Sangha thus acts as the stimulus for community participation and actions. The combination of the two frameworks has contributed to a more holistic and participatory communication for social change and development approach that is more relevant to community development in Laos.