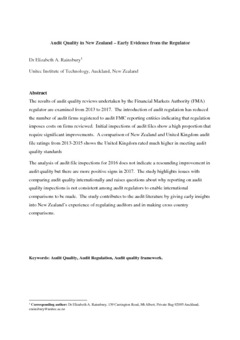 The results of audit quality reviews undertaken by the Financial Markets Authority (FMA) regulator are examined from 2013 to 2017. The introduction of audit regulation has reduced the number of audit firms registered to audit FMC reporting entities indicating that regulation imposes costs on firms reviewed. Initial inspections of audit files show a high proportion that require significant improvements. A comparison of New Zealand and United Kingdom audit file ratings from 2013-2015 shows the United Kingdom rated much higher in meeting audit quality standards The analysis of audit file inspections for 2016 does not indicate a resounding improvement in audit quality but there are more positive signs in 2017. The study highlights issues with comparing audit quality internationally and raises questions about why reporting on audit quality inspections is not consistent among audit regulators to enable international comparisons to be made. The study contributes to the audit literature by giving early insights into New Zealand’s experience of regulating auditors and in making cross country comparisons.