The future of technological advancements in public art 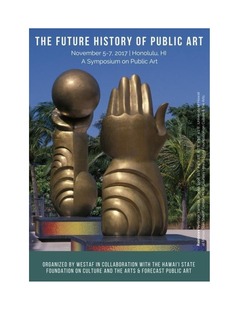 My talk is called “The Potential for Public Art in the Digital Near Future.” I just want to say near future, so we're not thinking 20 to 30 years ahead. Over the last two decades, I think it is fair to say that lots of institutions have increasingly adopted a whole bunch of digital technologies to start collecting and analyzing audience and visitor data. It’s also been adopted to extend participation and education initiatives. WESTAF's Public Art Archive is a brilliant example of precisely that. The uptake of the digital technology that enables public art projects—at least in institutional programming—has proceeded at a much slower pace. That is attributable perhaps to the difficulty and cost involved in provisioning public spaces with durable and secure digital infrastructures. I think that Jen [Lewin] can probably attest quite well to that, having had to create all of her own hardware. The widespread adoption of mobile devices and, in particular, those providing Internet access (mobile access exceeded desktop access in 2016), together with the declining cost of large-format digital display technologies, screen and projector technologies, and LEDs change this situation considerably—making possible the emergence of a range of public art projects such as Jen’s but also a number that I'll talk about very briefly. Blast Theories - I Like Frank (2004) Electroland - Enteractive (2006) Maurice Benayoun - Emotion Forecast (2010) John Craig Freeman and Greg Ulmer (Manifest.AR) - School Shooting eMorial (2013)

1999 Other Studies in the Creative Arts and Writing, 080502 Mobile Technologies