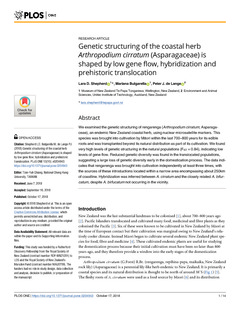 We examined the genetic structuring of rengarenga (Arthropodium cirratum; Asparagaceae), an endemic New Zealand coastal herb, using nuclear microsatellite markers. This species was brought into cultivation by Māori within the last 700–800 years for its edible roots and was transplanted beyond its natural distribution as part of its cultivation. We found very high levels of genetic structuring in the natural populations (FST = 0.84), indicating low levels of gene flow. Reduced genetic diversity was found in the translocated populations, suggesting a large loss of genetic diversity early in the domestication process. The data indicates that rengarenga was brought into cultivation independently at least three times, with the sources of these introductions located within a narrow area encompassing about 250km of coastline. Hybridization was inferred between A. cirratum and the closely related A. bifurcatum, despite A. birfucatum not occurring in the vicinity.

This is an open access article distributed under the terms of the Creative Commons Attribution License, which permits unrestricted use, distribution, and reproduction in any medium, provided the original author and source are credited.