Bicycle revolution : a new bicycle network for Auckland - towards an elevated cycleway development in Auckland CBD 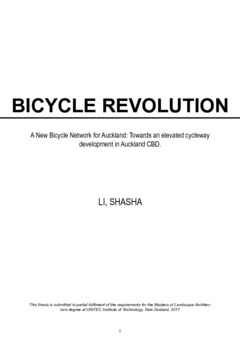 Li, S. (2017). Bicycle revolution : a new bicycle network for Auckland - towards an elevated cycleway development in Auckland CBD. A thesis submitted in partial fulfilment of the requirements for the Masters of Landscape Architecture degree, Unitec Institute of Technology, Auckland, New Zealand.

RESEARCH QUESTION: Can an independent cycle network make bicycle use a primary form of transportation, to provide sustainable mobility for Auckland? A correlation between the increasing use of fossil fuels and decreasing quality of urban environments is now generally conceded. The biggest culprits of urban pollution are combustion-driven vehicles. As a result, interest is growing in viable ‘green’ alternatives to city mobility. A top consideration is the common bicycle, which has been regaining popularity in compact cities as a simple, inexpensive, low-impact and localised solution to moving within cities. A broad scale adoption of bicycling as a primary mode of travel still faces critical issues of infrastructure, convenience and ease. In the case of Auckland, however, a strong outdoor culture rarely includes cycling in the many definable ‘kiwi’ outdoor activities. Reasons given for this include the problems of geography (Laing, 2014; NZ Transport Agency, 2011), climate (NZ Transport Agency, 2011), and infrastructure (Matt, 2014). Nevertheless, Auckland Council has acknowledged the successes of other cities, such as Copenhagen, New York and London (NZ Transport Agency, 2011), and has promised investment of $300m over the next 10 years (Auckland Transport, 2015). Despite the resolve to extend the cycle network, the Auckland Council’s proposal has not yet resolved conflicts between the distinct user groups of large road-vehicles (cars, etc.), small road-vehicles (bikes, etc.) and pedestrians. As a result, the current programmes deal inadequately with safety, aesthetics and expense. This project suggests a separation of existing networks, and explores the opportunities of designing an independent cycle network that would provide excellent synergy with existing infrastructure while clearly separating use – for the safety and benefit of cyclists, motorists, and pedestrians. It is expected that such a cycle network would encourage cycle use as a primary form of transportation, making Auckland a greener, safer, more enjoyable and less expensive place to live.