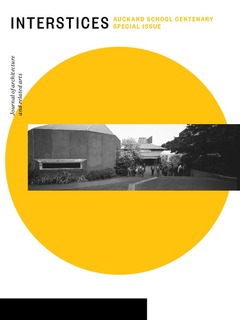 From early on in his career, Austrian-born architect Ernst Plischke (1903–1992) wished not only to be a practising architect but also to be able to pass on his knowledge as a professor. As an emigre in Wellington in the 1940s, he was able to give small series of lectures, sometimes in private circles, at other times in collaboration with the Architectural Centre. In 1947, he applied for a position of Chair of Design at Auckland University College. Although interviewed, the University preferred Charles Light, a Beaux-Arts trained, English candidate with considerable teaching experience. Instead of teaching at university, Plischke began his successful career as an independent architect (in partnership with Cedric Firth). Sixteen years later, in 1963, Plischke left New Zealand to return to Vienna. While giving up his practice in Wellington, he was finally able to teach architectural design. For 10 years until 1973, Plischke taught his Master class at the Academy of Fine Arts. The teaching aspect of his career has not previously been researched extensively. In his autobiography of 1989, Plischke shows a few projects from this time, while Sarnitz and Ottilinger in their 2003 catalogue of Plischke’s complete works only touch this subject ever so lightly. The most thorough documentation of his teaching stems from a 1976 publication of student designs, while the best documentation of the long-term results of his teaching is the collection of essays by his former students and assistants (also 2003) in which fourteen contributions are devoted to Plischke as teacher. Some of his former students have formed the Plischke Society to keep the memory of their teacher alive. This alone indicates that Plischke had given more than just ordinary teaching. Plischke is well known as a staunch supporter of modernist architecture—indeed, of a light, elegant modernism. Did he teach what he practised? Drawing from literature and personal conversations, as well as archival material, this article aims to show that while Plischke was strict in expecting architectural modernism of a high quality from his students, more important to him may have been to teach his students a moral compass, to develop an underlying noble mind that would support their architectural endeavours.