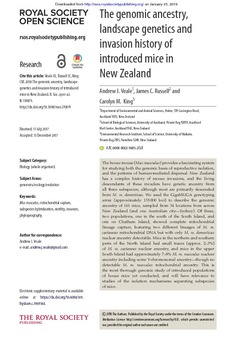 The house mouse (Mus musculus) provides a fascinating system for studying both the genomic basis of reproductive isolation, and the patterns of human-mediated dispersal. New Zealand has a complex history of mouse invasions, and the living descendants of these invaders have genetic ancestry from all three subspecies, although most are primarily descended from M. m. domesticus. We used the GigaMUGA genotyping array (approximately 135 000 loci) to describe the genomic ancestry of 161 mice, sampled from 34 locations from across New Zealand (and one Australian city—Sydney). Of these, two populations, one in the south of the South Island, and one on Chatham Island, showed complete mitochondrial lineage capture, featuring two different lineages of M. m. castaneus mitochondrial DNA but with only M. m. domesticus nuclear ancestry detectable. Mice in the northern and southern parts of the North Island had small traces (approx. 2–3%) of M. m. castaneus nuclear ancestry, and mice in the upper South Island had approximately 7–8% M. m. musculus nuclear ancestry including some Y-chromosomal ancestry—though no detectable M. m. musculus mitochondrial ancestry. This is the most thorough genomic study of introduced populations of house mice yet conducted, and will have relevance to studies of the isolation mechanisms separating subspecies of mice.