Preserving Waihi's golden past : a research into the culture of the game and its engine to support and enrich an explorative engagement with Waihi's gold mining industry 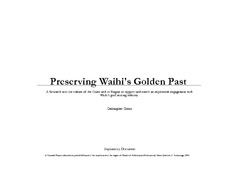 Green, C. (2018). Preserving Waihi's golden past: A research into the culture of the game and its engine to support and enrich an explorative engagement with Waihi's gold mining industry. Explanatory document. An unpublished research project submitted in partial fulfilment of the requirement of the degree of Master of Architecture (Professional). Unitec Institute of Technology, New Zealand.

RESEARCH QUESTION: How can the concept of the game engine, its technologies and the philosophies of game design support an interdisciplinary approach to creating architecture? My interest in the topic of examining ‘game architecture’ as a precursor to an architectural methodology stems from its capacity to formulate unorthodox space. Game architecture uses references to 'real architecture' to generate a layer of information that convinces the observer that the virtuality is related to their real experiences. This enables game designers to ground concepts of thought into interactive experiences. The means of managing an environment through the lens of a Game Engine requires designers to develop and organise libraries of objects. These objects are described under the prolific term ‘asset’ which is used to categorise all objects that are essential to building a game world environment. An ‘asset’ broadly defines every conceivable object in every form of matter, whether it be a solidity of a wall, the liquid state of water flowing down a stream or the gaseous smoke that bellows from an industrial building. Assets are produced in a variety of software, optimised for creating sounds, 3D objects and particle animations, and are managed by their file types. The Game Engine mostly supports mainstream file types to enable these externally created libraries of assets to be used within the parameters and tools provided by the Game Engine. The principle of importing an external asset assists designers to compose libraries of personally developed or acquired assets to satisfy their design objectives. In contrast, 'Procedural Architecture' that uses industry standard software, like Revit, does not require the import of external assets. Revit’s workflow is supported by a library of parametric tools and generic objects that provides designers with enough to work within its framework. Revit does not require its software structure to distinguish file types in the same way as the Game Engine and as such an architectural designer could work within Revit to produce a desirable result. Producing content in Revit’s interface, has a strong preference for the visual perspective of an architect’s normal perceptions of plan level, section and axonometric. Revit’s preference for the use of drawings in the design process encourages an inherently 2D view of architecture. Revit’s framework for utilising a distinctive internal library allows designers to produce architecture that might be described as 'Procedural Architecture'. 'Procedural Architecture' is a product of working within Revit's framework. That is in Revit's case, objects created using an internally coded tool such as generating a wall that uses direction and magnitude, a vector, to produce a 'wall' object. In contrast to Revit’s existing library, the Game Engine is designed to support file types from various generative software, meaning the Game Engine is not designed for creating environmental content, rather supporting the placement of content in the creation of game world environments. The Game Engine has a preference for constructing world environments in 3D as testing play and lighting conditions occurs in 3D conditions if the game is designed to be viewed in 3d space. The state of the product is how one may differentiate the two frameworks. Revit is designed to generate a set of drawings that can be used to plan the state of a building's physical architecture. By contrast, the Game Engine creates active game world environments as a virtual product which one may call digital architecture. The aim of the comparison is to establish that the Game Engine is designed to draw from a larger pool of resources to deal with a better presentation of 3D reality than the 'Procedural Architecture' can utilise. The research project embodies an interest in the Game Engine as a way of deriving 'Generative Architecture' as a contrast to the standard process. In this case, this research project is going to use this capacity to generate a keen sense of a historic narrative. As a case study, the history of Gold Mining in the Hauraki region of New Zealand provides a lively historic context which has influenced the tourist strategy of the townships within the region. One should be clear that the document does not intend on creating a facsimile of the parts that make up the history of gold mining. Instead, the project intends on interpreting the history as a piece of architecture that is entirely fiction rather than a faithful rendition of history. The objective of the project is to define a quality of architecture that is present in the design of media-based architecture in areas such as games, film and literature, but not in real architecture. This quality is described as the 'fantastical'. The aim of the project is to analyse game architecture to summarise the characteristics of this fantastical' quality and how this can be translated to real architecture. The state of project's final architecture as a typology is not relevant and as such the Game Engine becomes a mediator of an exploratory experience in order to investigate what qualifies architecture to take on a 'fantastical' quality.