Collaborative housing as a response to the housing crisis in Auckland 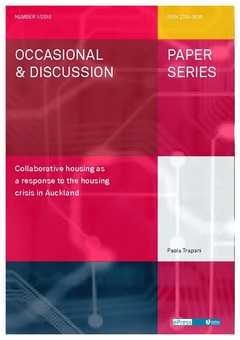 RESEARCH QUESTION: If housing is a PSS [Product/Service System] in transition to which the paradigm of the functional economy can be applied, how do we redefine the role of designers who want to work in this field? According to future projections based on current demographic growth trends, Auckland’s population will reach two million in 2033. Since the city is already afflicted by a serious housing crisis, at the beginning of 2017 the newly elected Mayor Phil Goff set up a task force. Formed by representatives of various stakeholders, it was given the task of producing a report with strategic and tactical guidelines to mitigate the situation. Unitec researchers were invited to respond to the report, which came out at the end of 2017, in the form of three think pieces towards the Building Better Homes, Towns and Cities National Science Challenge. This paper is a new iteration of one of these think pieces, focused on collaborative living, and expands on the new role that designers should play in this field. Its ideological position is that the house cannot and should not be considered as a commodity on the free market; nor should focus solely be on bringing down prices by increasing the number of houses on offer. Over time, housing might evolve to being more about social (use) value than exchange value. Other models of the production and consumption of household goods are documented throughout the world as alternatives to mainstream market logic, using collective procurement mechanisms to cut construction and marketing costs with savings of up to 30%. These experiments, not limited to achieving financially sustainable outcomes, are linked to new social practices of collaboration between neighbours. The sharing of spaces and equipment to complement private housing units also leads to social and environmental sustainability. This paper is a longer version of a Building Better Homes Towns and Cities National Science Challenge think-piece commissioned by BRANZ for publication in early 2018.

Collaborative housing as a response to the housing crisis in Auckland by Paola Trapani is licensed under a Creative Commons AttributionNonCommercial 4.0 International License.