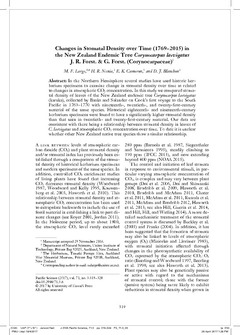 In the Northern Hemisphere several studies have used historic herbarium specimens to examine change in stomatal density over time as related to changes in atmospheric CO2 concentration. In this study we compared stomatal density of leaves of the New Zealand endemic tree Corynocarpus laevigatus (karaka), collected by Banks and Solander on Cook’s first voyage to the South Pacific in 1769–1770 with nineteenth-, twentieth-, and twenty-first-century material of the same species. Historical eighteenth- and nineteenth-century herbarium specimens were found to have a significantly higher stomatal density than that seen in twentieth- and twenty-first-century material. Our data are consistent with there being a relationship between stomatal density in leaves of C. laevigatus and atmospheric CO2 concentration over time. To date it is unclear whether other New Zealand native tree species show a similar relationship.