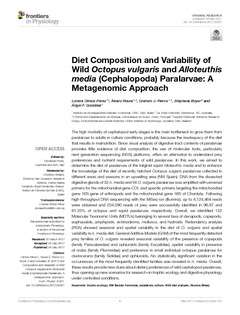 The high mortality of cephalopod early stages is the main bottleneck to grow them from paralarvae to adults in culture conditions, probably because the inadequacy of the diet that results in malnutrition. Since visual analysis of digestive tract contents of paralarvae provides little evidence of diet composition, the use of molecular tools, particularly next generation sequencing (NGS) platforms, offers an alternative to understand prey preferences and nutrient requirements of wild paralarvae. In this work, we aimed to determine the diet of paralarvae of the loliginid squid Alloteuthis media and to enhance the knowledge of the diet of recently hatched Octopus vulgaris paralarvae collected in different areas and seasons in an upwelling area (NW Spain). DNA from the dissected digestive glands of 32 A. media and 64 O. vulgaris paralarvae was amplified with universal primers for the mitochondrial gene COI, and specific primers targeting the mitochondrial gene 16S gene of arthropods and the mitochondrial gene 16S of Chordata. Following high-throughput DNA sequencing with the MiSeq run (Illumina), up to 4,124,464 reads were obtained and 234,090 reads of prey were successfully identified in 96.87 and 81.25% of octopus and squid paralarvae, respectively. Overall, we identified 122 Molecular Taxonomic Units (MOTUs) belonging to several taxa of decapods, copepods, euphausiids, amphipods, echinoderms, molluscs, and hydroids. Redundancy analysis (RDA) showed seasonal and spatial variability in the diet of O. vulgaris and spatial variability in A. media diet. General Additive Models (GAM) of the most frequently detected prey families of O. vulgaris revealed seasonal variability of the presence of copepods (family Paracalanidae) and ophiuroids (family Euryalidae), spatial variability in presence of crabs (family Pilumnidae) and preference in small individual octopus paralarvae for cladocerans (family Sididae) and ophiuroids. No statistically significant variation in the occurrences of the most frequently identified families was revealed in A. media. Overall, these results provide new clues about dietary preferences of wild cephalopod paralarvae, thus opening up new scenarios for research on trophic ecology and digestive physiology under controlled conditions.

2017 Olmos-Pérez, Roura, Pierce, Boyer and González. This is an open-access article distributed under the terms of the Creative Commons Attribution License (CC BY). The use, distribution or reproduction in other forums is permitted, provided the original author(s) or licensor are credited and that the original publication in this journal is cited, in accordance with accepted academic practice. No use, distribution or reproduction is permitted which does not comply with these terms.