‘Death to Videodrome’: Cronenberg, Žižek and an ontology of the real 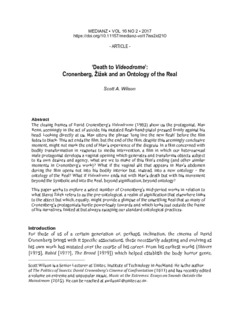 The closing frames of David Cronenberg’s Videodrome (1983) show us the protagonist, Max Renn, seemingly in the act of suicide, his mutated flesh-hand-pistol pressed firmly against his head. Looking directly at us, Max utters the phrase ‘long live the new flesh’ before the film fades to black. This act ends the film, but the end of the film, despite this seemingly conclusive moment, might not mark the end of Max’s experience of the diegesis. In a film concerned with bodily transformation in response to media intervention, a film in which our heterosexual male protagonist develops a vaginal opening which generates and transforms objects subject to its own desires and agency, what are we to make of this film’s ending (and other similar moments in Cronenberg’s work)? What if the vaginal slit that appears in Max’s abdomen during the film opens not into his bodily interior but, instead, into a new ontology – the ontology of the Real? What if Videodrome ends not with Max’s death but with his movement beyond the Symbolic and into the Real, beyond signification, beyond ontology? This paper seeks to explore a select number of Cronenberg’s mid-period works in relation to what Slavoj Žižek refers to as the pre-ontological, a realm of signification that elsewhere links to the abject but which, equally, might provide a glimpse of the unsettling Real that so many of Cronenberg’s protagonists hurtle powerlessly towards and which lurks just outside the frame of his narratives, hinted at but always escaping our standard ontological practices.