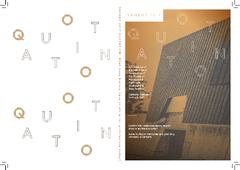 Palladio's treatise I quattro libri dell’architettura, first published in 1570, was well received and widely successful in its own time and afterwards. Palladio achieved a perfect balance of lucid text and meticulous woodcut illustrations. Having both intellectual and visual appeal, the treatise opened new ppaths for the dissemination of knowledge in architecture. However, an inconsistency can be found between what he wrote and what can be seen in his drawings. Furthermore, inconsistency exists between the text and drawings and Palladio’s buildings “as executed “. This particularly applies to one of the world’s most influential buildings – Villa Almerico Capra Valmarana, widely known as La Rotonda. Many generations of visitors have written about the magnificence of the surroundings in which La Rotonda is located; and Palladio himself described the site as “one of the most pleasing and delightful that one could find “. However, his drawings of the Villa do not include any aspect of the location so highly valued and praised in the text. La Rotonda’s shape, symmetries, and axes are absolute and do not appear to derive from any aspect of the location. Also, although designed to be a perfect geometrical form with four virtually identical façades, porticos and broad staircases, La Rotonda on two sides cannot be approached at all. So, one of the most “quoted” buildings of all times in many ways confuses us if we want to learn how to translate architectural design principles into built form. Taking Palladio as its reference point, this paper will focus on methodological questions of quotation and evaluate misquotation as a legitimate tool in architectural history, theory and practice.

Copyright of this volume belongs to SAHANZ. Copyright of the content of individual contributions remains the property of the named author or authors.