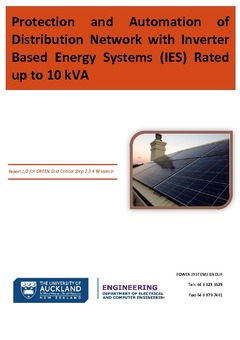 With increasing penetration of Inverter based Energy System (IES), it is necessary to investigate the impact of IES presence on existing distribution network, particularly protection. To carry out comprehensive protection assessment due to IES penetration, the distribution network is subdivided into three zones- home zone, LV zone, MV zone. The impact of IES on the MV zone and its recommended guidelines is elaborated in the accompanying report 1 for Critical Step (CS) 2.3.4. The main aim of this report 2 for CS 2.3.4 is to highlight the impact of the integration of IES rated up to 10 kVA in Low Voltage (LV) distribution network and recommend guidelines for safety and protection. A comprehensive literature review is undertaken to understand the behavior of the Distributed Energy Resource (DER), and the potential impacts on existing protection schemes employed. The DERs are divided into two broad categories during analysis - rotating machine based DER and inverter based DER. Based on the literature review, simulation and testing carried out it is concluded the fault current contribution of inverter based DER does not typically exceed 1.2 p.u. while for rotating machines it is typically known to be between 5-10 times their rated current. Various penetration levels of IES and with different configurations of low voltage distribution network are simulated in DIgSILENT software to analyze the impact of IES on the existing protection scheme. The accurate modelling of the inverter is achieved by real time laboratory testing of various models of grid connected inverters. It is found that high penetration levels of IES on LV feeders do not cause any protection issues in the home zone and the existing safety and protection schemes as detailed in AS/NZS 3000 is adequate. The impact of Arc Fault Resistance (AFR) and the penetration level of IES on the operation time of the existing protection device (fuse) for the feeder have been assessed through simulations for the LV grid zone. The 6 typical Orion representative networks have been used to demonstrate the potential protection impact. The feeders are categorized based on the impedance characteristics and fault levels following as per the IEC 60725 suggested methods. Feeders with high probability of potential protection miscoordination could be identified through this process. Several faults of varying AFR are conducted, including symmetrical and unsymmetrical faults, combined with varying percentage of ICP with connected, to identify issues with operation of LV fuse. Single phase connections with maximum of 5 kVA rated IES and three phase connections with maximum of 10 kVA rated IES case studies have been simulated. It is found that for an extreme case of high impedance faults, at the end of feeders having over-head line, could pose issues for regular operation of fuses, and in some cases cause sympathetic tripping of fuse in the adjacent feeder. The analysis carried out shows that there will be no impact on existing LV feeder protection for three phase faults, as the fault contribution from grid stays significantly larger than fault contribution from the IES cluster. However, for single line to ground faults, the existing protection scheme will have to be re-evaluated for fuse insensitivity and miscoordination issues for LV feeders, when the IES penetration exceeds around 50% of transformer rating. The procedure to carry out impact of IES on the existing protection scheme for LV distribution network is demonstrated for residential network 1 of the typical Orion feeder with realistic fuse rating and similar studies can be undertaken to evaluate the existing protection scheme for other different LV feeder configurations with IES penetration. A simple solution suggested in this report to address the issue of miscoordination is indexing of fuse with increasing penetration to compensate for reduced load demand. Other potential solution like implementation of GREEN Grid interconnection box is proposed and discussed in detail in Report 1 ‘Protection and Automation of Distribution Network with Inverter Based Energy Systems (IES) Rated greater than 10 kVA’. The existing standards and practices for protection and installation of DG in New Zealand’s 29 distribution utilities are reviewed in this report. The special protection and installation guidelines for inverter based energy system that is followed by international utilities with high penetration of IES have also been reviewed in this report. Based on actual inverter testing, simulation studies and the current standards, safety and protection guidelines are proposed for New Zealand to ensure safe and reliable integration of IES in the low voltage network which is the key industry relevant outcome of this report. Protection settings for the IES and the grid are recommended. The requirements and recommended settings of power limiting devices to be used by utilities in case of limited export of power due to network constraints are defined. These safety and protection requirements are incorporated in section 2.3 of ‘Guideline for the Connection of Small-Scale Inverter Based Distributed Generation’ released by Electricity Engineers’ Association for industry consultation. The simulation and modelling used for protection has been better informed through the several detailed tests conducted on different models of inverter. These tests included LVRT properties, VAR control modes (grid support functionalities), and anti-islanding tests. The testing experience from this report would be continued further for ongoing critical steps on extended reserves (Automatic Under-Frequency Load Shedding), which is part of forthcoming Work Packages associated with CS 2.3.6. The representative LV modelling work presented in this report will be used to realize Work Package items related to voltage control methods as part of CS 2.3.7.