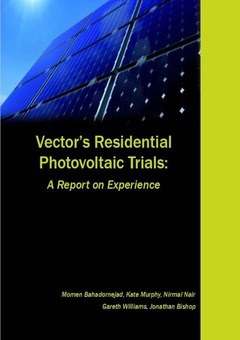 In 2013, Vector initiated the SunGenie program; a residential solar Photovoltaic (PV)/battery storage system, to assess the uptake with customers and the effect on the grid with a solar integrated battery solution. This was the first of its kind in New Zealand and after extensive studies and design work Vector started the rollout of their SunGenie solar storage package to a total 289 homes (2015 figure) on their network. The idea behind the program was to investigate new methods of dealing with fluctuating grid demand and to assess the development and implementation of a utility-led battery storage solution. As part of the GREEN Grid project, critical step 2.3.5, the University of Auckland’s Power Systems Group (PSG) was responsible to closely follow the initiation, design, data collection, testing & monitoring phases of Vector’s PV trials and to record the experiences and lessons learnt that will provide to be useful for all New Zealand utilities. The experiences recorded from PSG’s involvement in Vectors SunGenie trials have been included in this document. The initiation of the solar photovoltaic trials, combining research with industry, developed a strong working relationship between PSG and Vector. PSG initially provided Vector with the background knowledge of PV and battery technologies and the grid impacts of runaway take-up of residential PV. With this knowledge of PV/ Battery systems, published as a white paper, Vector developed their SunGenie business plan for the trials. PSG participated further in the PV trials in the testing of the inverters and their protection and automation settings. An inverter test bench was developed at the University of Auckland and after a series of tests performed on three shortlisted inverters, a choice was made on the inverter that proved best to use and PSG recommended the required inverter settings. The key findings from the trials, detailed in this document, are aimed at not only the utilities but also to inform the general public and potential customers with the knowledge taken from the initiation, design, testing and operation stages of Vector’s solar PV/battery trials. Future work includes the monitoring and data acquisition of the SunGenie’s performance. This monitoring will provide Vector with the possible grid impacts if any, of the PV systems in the future. Vector have also agreed to continue working with PSG in the next critical step of the GREEN Grid project in which new methods of coordinated voltage control will be tested alongside a new “residential clustered PV/storage” project owned by Vector. This work has already commenced and PSGs involvement in these trials will continue until the 30th September 2017. Report revision 1.0 (14th January 2016)