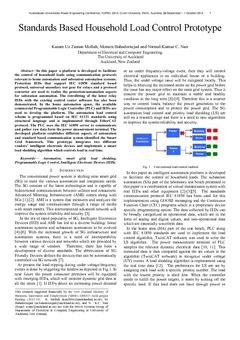 In this paper a platform is developed to facilitate the control of household loads using communication protocols relevant to home automation and substation automation systems. Protection IEDs that support IEC 61850 standard based protocol, universal secondary test gear for relays and a protocol converter are used to realize the protection/automation aspects for substation automation. The retrofitting of the latest relay IEDs with the existing control center software has also been demonstrated. In the home automation space, the available commercial Programmable Logic Controller (PLC) and IEDs are used to develop the platform. The automation load control scheme is programmed based on IEC 61131 standards using structural language and is implemented through EtherCAT protocol. The PLC uses the IEC 61850 server to communicate and gather raw data form the power measurement terminal. The developed platform establishes different aspects of automation and standard based communication system identified the Smart Grid framework. This prototype integrates two different vendors’ intelligent electronic devices and implements a smart load shedding algorithm which controls load in real time. This research supported financially by the New Zealand Ministry of Business, Innovation and Employment (MBIE) GREEN Grid project funding (2012-18). K. Mollah (kmol006@aucklanduni.ac.nz), M.Bahadornejad (m.bahadornejad@auckland.ac.nz), and N. –K.C. Nair (Email: n.nair@auckland.ac.nz) are with the Power Systems Group of Department of Electrical & Computer Engineering at University of Auckland, New Zealand.