The New Zealand eFlora : delivering what’s needed in the electronic age to the people of New Zealand 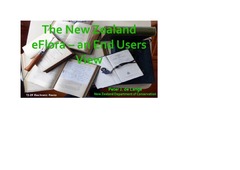 de Lange, P.J. (2017, July). The New Zealand eFlora : delivering what’s needed in the electronic age to the people of New Zealand. Paper presented at XIX International Botanical Congress - T2-09: Electronic Floras–integrating the best of the past with the possibilities of the future, Shenzhen, China.

The Flora of New Zealand has been traditionally served to the tax payer through a series of technical hard copy publications. The most recent of these, the New Zealand Flora Series, was initiated in the 1940s with the first volume published in 1961 and the last (as a second edition) in 2010. Although excellent for their time they served as static accounts, often dated when they went to print, and because of this sometimes causing confusion, or in the case of biosecurity matters a false impression of priorities. The move to an eFlora model for New Zealand has been relatively recent, the first treatment - The Hypericaceae was published in 2010. Since then 49 treatments have been published online covering 30 Moss, 16 Pteridophyte and nine flowering plant families (values as of 9 November 2016). In this presentation I explore the eFlora of New Zealand as seen by a major end user - the New Zealand Department of Conservation. * Traditional flora resources * New Zealand Department of Conservation User Needs * What names do we use and why? *Being consistent * New Zealand Threat Classification System (NZTCS) * Biostatus * Use New Zealand Herbarium Network * Consensus Model needed * Linkage to external websites * Other issues *Working with iwi *So where to from here?