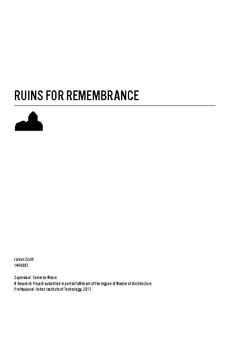 There is no other building that signifies what it means to be from Christchurch more than the Christchurch Cathedral. It is the symbol of the city, a unique part of the ambitions and aspirations of the founding fathers and early European settlers. The Cathedral tells the story of Christchurch, it is the heart, soul and centre of the city that is a part of our history in every sense of the word. Six years on from the devastating earthquakes of 2010 and 2011, the Cathedral has lain dormant preciously placed awaiting a decision dividing the city. The fate of Cathedral has shifted between two extremes: - Option A: A complete reinstatement and restoration of the original Cathedral. - Option B: Demolish the remains and build a contemporary replacement Cathedral. When reviewing the two extremes, the reinstatement of this building is a denial of the earthquakes and what the building and city have endured; the replacement and demolition of this building is a denial of its heritage and historical value. The Anglican Synod, the official assembly of the church clergy, voted to reinstate and restore the Cathedral, just weeks before this document was completed. Although this decision has been made, this research project introduces a third alternative, that sees the Christchurch Cathedral as a preserved ruin and transformed into a new civic centre. This scheme is neither restoration nor replacement but instead re-imagines and transforms the remains of the Cathedral through sensitive intervention as a space for the people. Seeking to ‘press pause’ on local social and architectural attitudes towards restoration and replacement, by exploring different design alternatives and future trajectories. Through this alternative, the building’s heritage and historical value are remembered, and the earthquake’s impact on the city is acknowledged.