Streets in the sky : how can architecture extend the public realm into the high-rise? 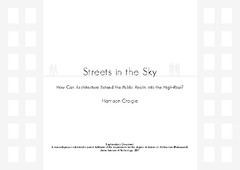 Craigie, H. (2017). Streets in the sky : how can architecture extend the public realm into the high-rise? Explanatory document An unpublished research project submitted in partial fulfilment of the requirements for the degree of Master of Architecture (Professional). Unitec Institute of Technology, New Zealand.

Urbanisation is inevitably stretching our cities deeper into the ground and higher into the sky. Over the past century, influences of the motor vehicle and the High-Rise form have induced a growing disconnect between dwellers and street life. Although more and more people live in cities, the current High-Rise urban form encourages privatised living. It neglects the pedestrian experience, creates a vertical socio-economic hierarchy, and prompts poor social relations. By integrating pedestrian infrastructure into architecture, growing cities can increase and evenly distribute their public space. Pedways (elevated and subterranean walkways) have been used since at least the 8th - 7th century B.C. However, most of the significant research for this project has come from the past 100 years. Some of these visions have been partially realised in places such as North America and Hong Kong. However, these networks only engage in the lower floors of High-Rises, and often lack the elaborate social intent of the utopian visions. Current networks are constrained by social, political, economic factors. This project critiques previous visions, and investigates more holistic approaches to realising these visions. This project aims to encourage ‘street life’ above and below ground level. It is important to identify the essential elements of ‘a great street’ and to reinterpret these within the High-Rise. The objectives are to enable ’the vertical street’, ’elevated neighbourhoods’, and ‘hybridisation’ throughout the entire building. In doing so, the project strives to remedy social issues resulting from the current High-Rise form. Auckland is an appropriate test site for this topic, as it is in the early stages of dense urban development, and has the current opportunity to integrate pedways into its masterplan - an appropriate response to the accelerating population and the incomplete pedestrian network.