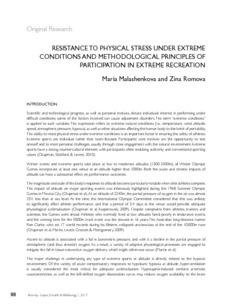 Scientific and technological progress, as well as personal motives, dictate individuals’ interest in performing under difficult conditions; some of the factors involved can cause adjustment disorders. The term “extreme conditions” is applied to such variables. The expression refers to extreme natural conditions (i.e., temperature, wind, altitude, speed, atmospheric pressure, hypoxia) as well as other situations affecting the human body to the brink of portability. The ability to resist physical stress under extreme conditions is an important factor in ensuring the safety of athletes. Extreme sports are individual rather than team-focused. Participants’ core motives are the opportunity to test oneself and to meet personal challenges, usually through close engagement with the natural environment. Extreme sports have a strong counter-cultural element, with participants often snubbing authority and conventional sporting values (Chapman, Stickford, & Levine, 2010). Winter events and extreme sports take place at low to moderate altitudes (1500-2400m); all Winter Olympic Games incorporate at least one venue at an altitude higher than 1000m. Both the acute and chronic impacts of altitude can have a substantial effect on performance outcomes. The magnitude and scale of the body’s response to altitude become particularly notable when elite athletes compete. The impact of altitude on major sporting events was infamously highlighted during the 1968 Summer Olympic Games in Mexico City (Chapman et al). At an altitude of 2240m, the partial pressure of oxygen in the air was almost 25% less than at sea level. At the time, the International Olympic Committee considered that this was unlikely to significantly affect athletic performance, and that a period of 3-4 days at the venue would provide adequate physiological acclimatisation (Chapman et al; Kasperowski, 2009). Despite complaints from athletes, trainers and scientists, the Games went ahead. Athletes who normally lived at low altitudes fared poorly in endurance events, and the winning time for the 5000m track event was the slowest in 16 years. The Australian long-distance runner Ron Clarke, who set 17 world records during his lifetime, collapsed unconscious at the end of the 10,000m race (Chapman et al; Martin, Levett, Grocott & Montgomery, 2009). Ascent to altitude is associated with a fall in barometric pressure, and with it a decline in the partial pressure of atmospheric (and thus alveolar) oxygen. As a result, a variety of adaptive physiological processes are engaged to mitigate the fall in tissue-convective oxygen delivery which might otherwise occur (Martin et al) The major challenge in undertaking any type of extreme sports at altitude is directly related to the hypoxic environment. Of the variety of acute compensatory responses to hypobaric hypoxia at altitude, hyperventilation is usually considered the most critical for adequate acclimatisation. Hypocapnia-induced cerebral arteriolar vasoconstriction, as well as the left-shifted oxygen dissociation curve, may reduce oxygen availability to the brain. Since a constant supply of oxygen is essential to sustain life, organisms have evolved multiple defence mechanisms to ensure maintenance of the delicate balance between oxygen supply and demand. However, this homeostatic balance is perturbed in response to a severe impairment of oxygen supply, thereby activating maladaptive signalling cascades that result in cardiac damage (Essop, 2007). Our understanding of the human response to exercise at altitude is largely derived from field-based research at altitudes above 3000m, in addition to laboratory studies which employ normobaric hypoxia (Moore, Niermeyer, & Zamudio, 1998). According to a number of studies (Camm, et al., 1996; Malashenkova, 2009; Parin, Baevsky & Gazenko, 1965), the sustainability of an organism under extreme conditions is determined by the reserve capacity of its functional systems. However, in recent years (Kasperowski; Malashenkova & Nagornev, 2009; Mazzeo et al, 1991) the scientific evidence has indicated that there is a very high variability in individual human resilience to various environmental factors. The latest studies in this area have predominately focused on the morphological and functional conditions of separate systems. This gap in the research reinforces the need to study adaptation reactions in various groups of people and in different types of recreational activities. Currently, there are no scientifically proven systems that focus on the regulation of cardiovascular and respiratory adaptation to extreme conditions. Therefore, there is a need to develop a system that unifies the organisational and methodological principles of extreme recreation. By formulating and validating organisational and methodological principles of training for extreme recreation, this study supports a focus on increasing compensatory and adaptive opportunities and the functional reserves of the body while endorsing maximum safety and the need for a healthy lifestyle. The purpose of the present study is to investigate the adaptability factors that influence the body’s reserve opportunities to undertake a variety of extreme sports and recreation activities, and the major predictors of efficiency in extreme recreation, by implementing experimental procedures with a particular focus on high altitude areas (< 2500m). The study has also developed some key organisational and methodological principles for undertaking extreme recreation.