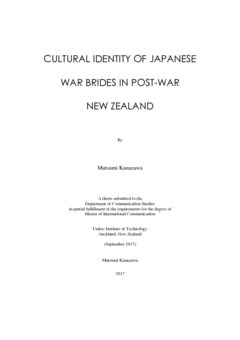 Kanazawa, M. (2017). Cultural identity of Japanese war brides in post-war New Zealand. An unpublished thesis submitted to the Department of Communication Studies, in partial fulfillment of the requirements for the degree of Master of International Communication, Unitec Institute of Technology, New Zealand.

Little is known about the experiences of Japanese war brides who met their New Zealand husbands-to-be, as part of the New Zealand's involvement in the Occupation Forces in post-war Japan. Was it an oversight or deliberate that the stories of these Japanese war brides have been largely forgotten in historical discourse both in New Zealand and Japan? Some of these Japanese women were disowned by their families because of their decision to marry former enemy nationals. Upon arrival in New Zealand, they found themselves in an unfamiliar culture with no existing Japanese community to support them Moreover, racial prejudice towards the Japanese was still prevalent in New Zealand. The narratives of these women reveal their determination and commitment to establishing their lives in New Zealand. Many of them joined the workforce in many capacities: As friends and supporters to Japanese tourists and as teachers of Japanese language and culture. Furthermore, through their work as cultural brokers and consultants, the women helped promote bilateral trade and made a significant contribution to progressing economic and diplomatic relations between Japan and New Zealand in the late 1950s and early 1960s. This research aims to preserve the stories of a sample of the Japanese war brides and to add to the general body of knowledge about early Japanese immigrants to New Zealand. This study is a qualitative investigation which examines the cultural identity of Japanese war brides who migrated to New Zealand in the 1950s and 60s. The oral history method was the principal method used to collect narratives from the war brides and their family members. The individual stories collected in this thesis add substance to the otherwise sparse account of war brides in New Zealand. This thesis also identifies the names and details of approximately 50 Japanese war brides who came to New Zealand, who up until now merely existed as little more than numbers in New Zealand official records. Overall, the stories collected in this thesis demonstrate the strength and courage of these Japanese women, despite major cultural differences they encountered and at a time when there existed significant racial tensions between individuals from former individual enemy nations, their contribution, therefore, requires acknowledgment.