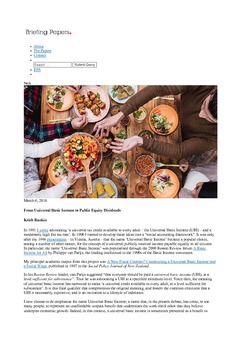 In 1991 I wrote advocating ‘a universal tax credit available to every adult – the Universal Basic Income (UBI) – and a moderately high flat tax rate’. In 1996 I started to develop these ideas into a “social accounting framework”. It was only after my 1996 presentation – in Vienna, Austria – that the name ‘Universal Basic Income’ became a popular choice, among a number of other names, for the concept of a universal publicly sourced income payable equally to all citizens. In particular, the name ‘Universal Basic Income’ was popularised through the 2000 Boston Review forum A Basic Income for All by Philippe van Parijs, the leading intellectual in the 1990s of the Basic Income movement. My principal academic output from this project was A New Fiscal Contract? Constructing a Universal Basic Income and a Social Wage, published in 1997 in the Social Policy Journal of New Zealand. In his Boston Review leader, van Parijs suggested “that everyone should be paid a universal basic income (UBI), at a level sufficient for subsistence”. Thus he was advocating a UBI at a specified minimum level. Since then, the meaning of universal basic income has narrowed to mean ‘a universal credit available to every adult, at a level sufficient for subsistence’. It is this final qualifier that compromises the original meaning, and fosters the common criticisms that a UBI is necessarily expensive, and is an invitation to a lifestyle of indolence. I now choose to de-emphasise the name Universal Basic Income; a name that, in the present debate, has come, to too many people, to represent an unaffordable utopian benefit that undermines the work-thrift ethos that they believe underpins economic growth. Indeed, in this context, a universal basic income is sometimes presented as a benefit to replace all other benefits – a maximum as well as a minimum benefit – meaning that people with unusually high needs may be denied public help in meeting those needs. Instead of universal basic income, I now advocate a public equity dividend. I have written a report for the Policy Observatory that details the idea of public equity, and provides a model for how, with minimal transition costs, it might work in New Zealand.