Ether : an atmosphere of possibility 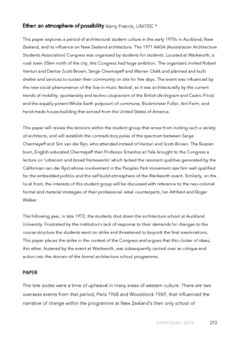 This paper explores a period of architectural student culture in the early 1970s in Auckland, New Zealand, and its influence on New Zealand architecture. The 1971 AASA (Australasian Architecture Students Association) Congress was organized by students for students. Located at Warkworth, a rural town 35km north of the city, this Congress had huge ambition. The organizers invited Robert Venturi and Denise Scott-Brown, Serge Chermayeff and Warren Chalk and planned and built shelter and services to sustain their community on site for five days. The event was influenced by the new social phenomenon of the live-in music festival, as it was architecturally by the current trends of mobility, spontaneity and techno utopianism of the British (Archigram and Cedric Price) and the equally potent Whole Earth potpourri of commune, Buckminster Fuller, Ant Farm, and hand-made house-building that arrived from the United States of America.