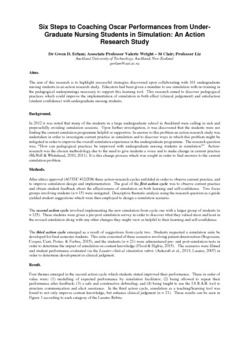 AIMS. The aim of this research is to highlight successful strategies discovered upon collaborating with 161 undergraduate nursing students in an action research study. Educators had been given a mandate to use simulation with no training in the pedagogical underpinnings necessary to support this learning tool. This research aimed to discover pedagogical practices which could improve the implementation of simulation in both effect (clinical judgement) and satisfaction (student confidence) with undergraduate nursing students. BACKGROUND. In 2012 it was noted that many of the students in a large undergraduate school in Auckland were calling in sick and purposefully avoiding simulation sessions. Upon further investigation, it was discovered that the students were not finding the current simulation programme helpful or supportive. In answer to this problem an action research study was undertaken in order to investigate current practice in simulation and to discover ways in which this problem might be mitigated in order to improve the overall simulation experience in the undergraduate programme. The research question was, “How can pedagogical practices be improved with undergraduate nursing students in simulation?” Actionresearch was the chosen methodology due to the need to give students a voice and to make change in current practice (McNiff & Whitehead, 2010, 2011). It is this change process which was sought in order to find answers to the current simulation problem. METHODS. After ethics approval (AUTEC #12/208) three action-research cycles unfolded in order to observe current practice, and to improve simulation design and implementation. The goal of the first action cycle was to observe current practice and obtain student feedback about the effectiveness of simulation on both learning and self-confidence. Two focus groups involving students (n = 15) were instigated. Descriptive thematic analysis using the research question as a guide yielded student suggestions which were then employed to design a simulation scenario. The second action cycle involved implementing the new simulation from cycle one with a larger group of students (n = 125). These students were given a pre-post simulation survey in order to discover what they valued most and least in the revised simulation along with any other changes they might view as helpful to their learning and self-confidence. The third action cycle emerged as a result of suggestions from cycle two. Students requested a simulation suite be developed for final semester students. This suite consisted of three scenarios involving patient deterioration (Bogossian, Cooper, Cant, Porter, & Forbes, 2015), and the students (n = 21) were administered pre- and post-simulation tests in order to determine the impact of simulation on content knowledge (Flood & Higbie, 2015). The scenarios were filmed and student performance evaluated via the Lasater clinical simulation rubric (Ashcraft et al., 2013; Lasater, 2007) in order to determine development in clinical judgment. RESULT. Four themes emerged in the second action cycle which students stated improved their performance. These in order of value were: (1) modelling of expected performance by simulation facilitator; (2) being allowed to repeat their performance after feedback; (3) a safe and constructive debriefing; and (4) being taught to use the I.S.B.A.R. tool to structure communication and elicit assistance. In the third action cycle, simulation as a teaching/learning tool was found to not only improve content knowledge, but enhance clinical judgment (n = 21). These results can be seen in Figure 1 according to each category of the Lasater Rubric