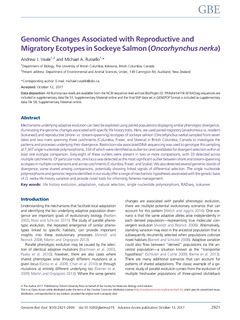 Mechanisms underlying adaptive evolution can best be explored using paired populations displaying similar phenotypic divergence,illuminating the genomic changes associated with specific life history traits. Here, we used paired migratory [anadromous vs. resident(kokanee)] and reproductive [shore- vs. stream-spawning] ecotypes of sockeye salmon (Oncorhynchus nerka) sampled from seven lakes and two rivers spanning three catchments (Columbia, Fraser, and Skeena) in British Columbia, Canada to investigate the patterns and processes underlying their divergence. Restriction-site associated DNA sequencing was used to genotype this sampling at 7,347 single nucleotide polymorphisms, 334 of which were identified as outlier loci and candidates for divergent selection within at least one ecotype comparison. Sixty-eight of these outliers were present in two or more comparisons, with 33 detected across multiple catchments. Of particular note, one locus was detected as the most significant outlier between shore and stream-spawning ecotypes in multiple comparisons and across catchments (Columbia, Fraser, and Snake). We also detected several genomic islands of divergence, some shared among comparisons, potentially showing linked signals of differential selection. The single nucleotide polymorphisms and genomic regions identified in our study offer a range of mechanistic hypotheses associated with the genetic basis of sockeye salmon (Oncorhynchus nerka) life history variation and provide novel tools for informing fisheries management. Data deposition All Illumina raw reads are available from the NCBI sequence read archive (BioProject ID: PRJNA414118 All RADtag sequences are included in supplementary data file S1, Supplementary Material online and the final SNP data set in GENEPOP format is included as supplementary data file S8, Supplementary Material online.

© The Author 2017. Published by Oxford University Press on behalf of the Society for Molecular Biology and Evolution. This is an Open Access article distributed under the terms of the Creative Commons Attribution License (http://creativecommons.org/licenses/by/4.0/), which permits unrestricted reuse, distribution, and reproduction in any medium, provided the original work is properly cited.