Density, energy and metabolism of a proposed smart city 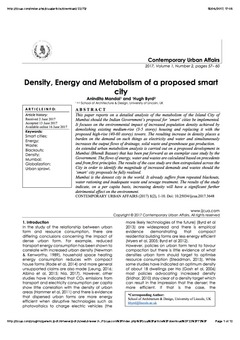 This paper reports on a detailed analysis of the metabolism of the Island City of Mumbai should the Indian Government’s proposal for ‘smart’ cities be implemented. It focuses on the environmental impact of increased population density achieved by demolishing existing medium-rise (3-5 storey) housing and replacing it with the proposed high-rise (40-60 storey) towers. The resulting increase in density places a burden on the demand on such things as electricity and water and simultaneously increases the output flows of drainage, solid waste and greenhouse gas production. An extended urban metabolism analysis is carried out on a proposed development in Mumbai (Bhendi Bazaar) that has been put forward as an exemplar case study by the Government. The flows of energy, water and wastes are calculated based on precedents and from first principles. The results of the case study are then extrapolated across the City in order to identify the magnitude of increased demands and wastes should the ‘smart’ city proposals be fully realised. Mumbai is the densest city in the world. It already suffers from repeated blackouts, water rationing and inadequate waste and sewage treatment. The results of the study indicate, on a per capita basis, increasing density will have a significant further detrimental effect on the environment.