UBI as a reconceptualisation of income tax 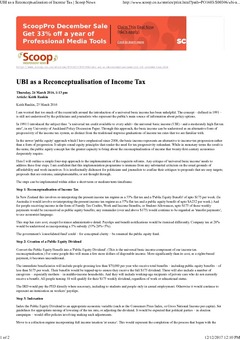 I am worried that too much of the recent talk around the introduction of a universal basic income has been unhelpful. The concept – defined in 1991 – is still not understood by the politicians and journalists who represent the public's main source of information about policy options. In 1991 I introduced the subject thus: "a universal tax credit available to every adult - the universal basic income (UBI) - and a moderately high flat taxrate", in my University of Auckland Policy Discussion Paper. Through this approach, the basic income can be understood as an alternative form of progressivity of the income tax system, as distinct from the traditional stepwise graduations of income tax rates that we are familiar with. In the newer 'public equity' approach which I have emphasised since 2008, the basic income represents an alternative to income-tax progression rather than a form of progression. It adopts sound equity principles that render the need for tax progressivity redundant. While in monetary terms the result is the same, the public equity concept has the greater capacity to bring about the reconceptualisation of income that twenty-first century economies desperately require. Here I will outline a simple four-step approach to the implementation of the requisite reforms. Any critique of 'universal basic income' needs to address these four steps. I am confident that this implementation programme is immune from any substantial criticism on the usual grounds of affordability and work incentives. It is intellectually dishonest for politicians and journalists to confine their critiques to proposals that are easy targets;proposals that are extreme, unimplementable, or not thought through