Hymnals and hymnody in Late Qing and Early Republican China 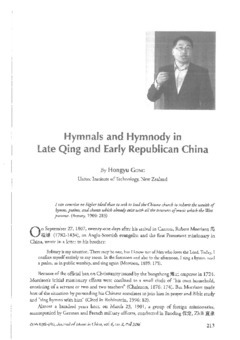 "That Christian hymn-singing played an important role in the daily life of many China missionaries and therefore was instrumental in the transmission of Western music in China is here plain to see. Speaking of "all the influences which have been brought to bear upon indigenous music styles in Oceania," Mervyn McLean, an ethnomusicologist specialised in Maori and Pacific Music, states, "hymn-singing is arguably the most important" (1986: 34). This statement is just as true of the situation in China. One of the important factors accounting for the primacy of hymn-singing influence, as Edwin Burrows has argued in his study of the Tuamotus, was "because it was introduced not by chance but by deliberate teaching, with the emotional power of religion behind it" (Burrows, 1933: 97-98). Yet both the processes of hymn book compiling and actual teaching of hymn-singing remain little-documented in Chinas. In this article I shall first outline the process of hymn book compiling by tracing the origins and evolution of Protestant hymns in China from the mid-nineteenth century to the early twentieth century. This is followed by a detailed analysis of missionary discussions of problems, especially those of a musical nature, associated with the introduction of Christian hymns to Chinese Christians. And in the final part I shall discuss the ways in which Chinese Christians responded to the types of hymn music they were introduced to and how their response led to an emergence of Chinese indigenous hymns"--Page 214