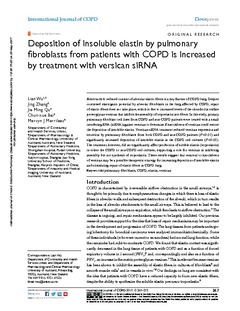 A reduced content of alveolar elastic fibers is a key feature of COPD lung. Despite continued elastogenic potential by alveolar fibroblasts in the lung affected by COPD, repair of elastic fibers does not take place, which is due to increased levels of the chondroitin sulfate proteoglycan versican that inhibits the assembly of tropoelastin into fibers. In this study, primary pulmonary fibroblast cell lines from COPD and non-COPD patients were treated with a small interfering RNA (siRNA) against versican to determine if knockdown of versican could restore the deposition of insoluble elastin. Versican siRNA treatment reduced versican expression and secretion by pulmonary fibroblasts from both COPD and non-COPD patients (P<0.01) and significantly increased deposition of insoluble elastin in the COPD cell cultures (P<0.05). The treatment, however, did not significantly affect production of soluble elastin (tropoelastin) in either the COPD or non-COPD cell cultures, supporting a role for versican in inhibiting assembly but not synthesis of tropoelastin. These results suggest that removal or knockdown of versican may be a possible therapeutic strategy for increasing deposition of insoluble elastin and stimulating repair of elastic fibers in COPD lung.

© 2017 Wu et al. This work is published and licensed by Dove Medical Press Limited. The full terms of this license are available at https://www.dovepress.com/terms.php and incorporate the Creative Commons Attribution – Non Commercial (unported, v3.0) License (http://creativecommons.org/licenses/by-nc/3.0/). By accessing the work you hereby accept the Terms. Non-commercial uses of the work are permitted without any further permission from Dove Medical Press Limited, provided the work is properly attributed. For permission for commercial use of this work, please see paragraphs 4.2 and 5 of our Terms (https://www.dovepress.com/terms.php)