An assessment of risk pathways for the spread of Argentine ants (Linepithema humile) and rainbow skinks (Lampropholis delicata) by commercial businesses in the eastern Rodney district, New Zealand to the islands of the Hauraki Gulf 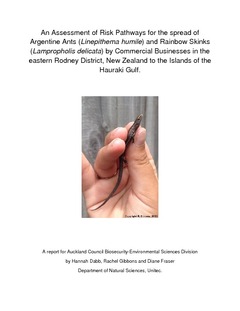 The Hauraki Gulf Marine Park encompasses an area of over one million hectares and includes a group of islands, some of which are classified as ‘pest-free’ (Department of Conservation, DOC, n.d.). Due to historical, ecological, cultural and economic value of these islands, significant effort is being made to protect these islands from the impacts of invasive species (DOC, n.d.). The negative effects of invasive species on native species and ecosystems may include ecosystem alteration, interspecific competition, predation, and disease transmission (Peace, 2004). Invasive species are a threat to current conservation of the Hauraki Gulf Islands and are spread both intentionally and unintentionally by human mediated dispersal (Humle, 2009). Two species in particular that are of increasing risk to the islands are the Argentine ants (Linepithema humile) and rainbow (or Plague) skink (Lampropholis delicata). Note that this is a preliminary report and final reports will be available by the end of 2015.