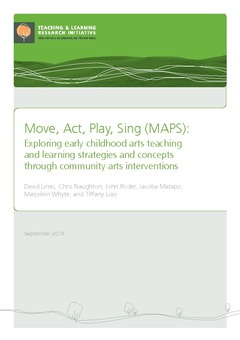 This research narrative tells the story of a Māori immersion early childhood centre’s engagement with the performing arts. In this research, and fundamental to this narrative is the provocation that came from the drama based Community Artist who, joining the centre,listened, shared, planned and lived drama arts practices with the children and teachers. This activity rests within a more extended arts based teaching and research learning initiative (TRLI) known as Move, Act, Play, Sing (MAPS), which also involved provocations from music and dance Community Artists . Drama and storytelling are the focus of the encounters shared here, particularly what might be understood as a ‘walking performance’ linked to a local mountain,which featured in the children’s lives and the life of the centre becoming-Māori. What emerged throughout the overall project was an affirmation of the intricate ties to lived experiences, sensations, encounters, interactions and intensities that are present in children’s work. Drama as ‘real’ or living is supported within the imaginary, where Deleuze identifies ‘real’ as both virtual and the actual (1988). Attention is drawn to the movement or leakage between virtual and the actual, enabling another of Deleuze’s concepts to operate, namely, the rhizome (Sellers, 2013). This research also draws on Deleuze and Guattari’s (1988) concept of assemblages of desire invoking the imaginary as a new means of expression affecting unexpected relations and connections, and it is within these emergent, unexpected, yet still anticipated potentials that this article seeks new possibilities for drama in early childhood education.