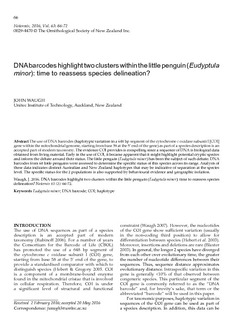 The use of DNA barcodes (haplotypic variation in a 648 bp segment of the cytochrome c oxidase subunit I [COI] gene within the mitochondrial genome, starting from base 58 at the 5’ end of the gene) as part of a species description is an accepted part of modern taxonomy. The evidence COI provides is compelling since a sequence of DNA is biological data obtained from living material. Early in the use of COI, it became apparent that it might highlight potential cryptic species and inform the debate around their status. The little penguin (Eudyptula minor) has been the subject of such debate. DNA barcodes from 53 little penguins were assessed to determine the specific status of this species across its range. Analysis of these data indicates distinct Australian and New Zealand haplotypes that may be indicative of separation at the species level. The specific status for the 2 populations is also supported by behavioural evidence and geographic isolation