Exergy and the city : the technology and sociology of power (failure) 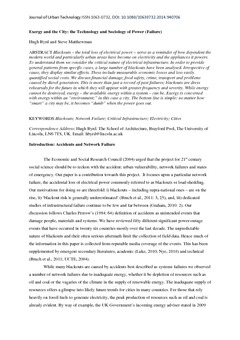 Blackouts—the total loss of electrical power—serve as a reminder of how dependent the modern world and particularly urban areas have become on electricity and the appliances it powers. To understand them we consider the critical nature of electrical infrastructure. In order to provide general patterns from specific cases, a large number of blackouts have been analyzed. Irrespective of cause, they display similar effects. These include measurable economic losses and less easily quantified social costs. We discuss financial damage, food safety, crime, transport, and problems caused by diesel generators. This is more than just a record of past failures; blackouts are dress rehearsals for the future in which they will appear with greater frequency and severity. While energy cannot be destroyed, exergy—the available energy within a system—can be. Exergy is concerned with energy within an “environment;” in this case a city. The bottom line is simple: no matter how “smart” a city may be, it becomes “dumb” when the power goes out.