PŪRĀTOKE : Journal of Undergraduate Research in the Creative Arts and Industries. Pilot issue. 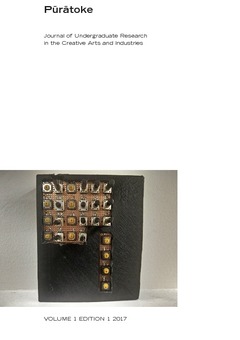 Pūrātoke is an online, peer-reviewed journal, dedicated to the publication of high-quality undergraduate student research within the creative arts and industries. This pilot issue features the work of eleven emerging researchers on subjects as diverse as post-colonial New Zealand cinema, Senegalese director Ousmane Sembène’s film Xala, post-modern Westerns, sound spatialisation, Sex and climaxes in the films Blue is the Warmest Colour and Carol, the doxing of white nationalists after Charlottesville riots, the female body and performance art online, treatments of the exotic and the feminine in nineteenth-century music, the contrasting orchestral-compositional approaches of film composers Bernard Herrmann and John Williams, the mediated sentencing of Metiria Turei, and Herman and Chomsky’s ideas in a post-communist world.

19 Studies in Creative Arts and Writing

Pūrātoke: Journal of Undergraduate Research in the Creative Arts and Industries is licensed under a Creative Commons Attribution-NonCommercial 4.0 International License.