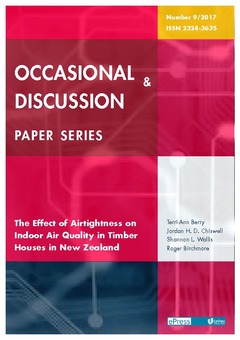 This two-part study considers the impact of airtightness based on volatile organic compounds (VOCs) only. Two identical buildings (test and control) were constructed in Auckland, New Zealand. The test building contained an Intello vapour check membrane to reduce air-flow and subsequent heat loss. Air change rates (air changes per hour, or ACH) were calculated from air-leakage rates in each of the buildings. For the test house, an average ACH taken from six consecutive tests was 1.88 compared with 8.27 for the control house. Data analysis demonstrated that the VOC levels in the test house were consistently higher than those established in the control house (student t-test >99.9% confidence). Average concentrations for VOCs were .23ppm (control) and 6.54ppm (test). Temperature and humidity were also significantly higher in the test house (student t-test >99.9% confidence). The use of the vapour check membrane had a significant effect on the indoor air quality of the unoccupied buildings (based on VOC concentration), possibly due to the change in air-flow from outside the buildings.VOC concentrations taken at height were considerably higher than those taken at ground level and demonstrated a greater variability, which coincided with fluctuations in temperature. This may be an important consideration for future design.