Talking past each other? A comparative study of the descriptions of the Russo- Japanese War in Japanese and Russian history textbooks, ca. 1997-2010 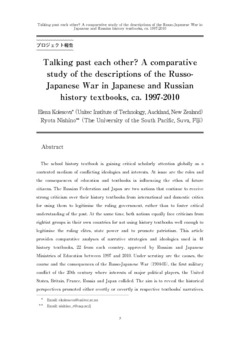 Kolesova, E., & Nishino, R. (2015). Talking past each other? A comparative study of the descriptions of the Russo- Japanese War in Japanese and Russian history textbooks, ca. 1997-2010. Aoyama Journal of International Studies, 2, pp.5-39.

The school history textbook is gaining critical scholarly attention globally as a contested medium of conflicting ideologies and interests. At issue are the roles and the consequences of education and textbooks in influencing the ethos of future citizens. The Russian Federation and Japan are two nations that continue to receive strong criticism over their history textbooks from international and domestic critics for using them to legitimise the ruling government, rather than to foster critical understanding of the past. At the same time, both nations equally face criticism from rightist groups in their own countries for not using history textbooks well enough to legitimise the ruling elites, state power and to promote patriotism. This article provides comparative analyses of narrative strategies and ideologies used in 44 history textbooks, 22 from each country, approved by Russian and Japanese Ministries of Education between 1997 and 2010. Under scrutiny are the causes, the course and the consequences of the Russo-Japanese War （1904-05）, the first military conflict of the 20th century where interests of major political players, the United States, Britain, France, Russia and Japan collided. The aim is to reveal the historical perspectives promoted either overtly or covertly in respective textbooks’ narratives. By choosing a topic that is pertinent to both nations’ representation of the direct military conflict between them, this study may help us to better appreciate the legacy of the ambivalent relations between Japan and Russia.