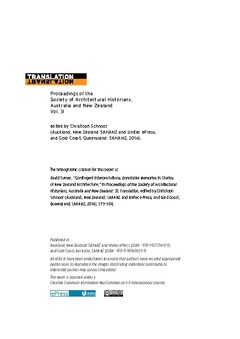 While the relocation of buildings is not unknown in other building cultures, this paper suggests that the practice in New Zealand of wholesale rearrangement is an over-casual approach to history, and that such rearrangements affect a city’s narrative in time. Shifting buildings is a practice in the building culture that denies reliable record, toys with memory, and thus, one that requires our buildings to be treated as contingent interpretations. The presence of a building in a particular place is contingent, and dependent on externalities rather than on any commitment to notions of permanence. As an example the relocation in 1982 of Benjamin Mountfort’s first Anglican Cathedral in Auckland, can further be understood as a representation of a conflicted approach to permanence as a condition of urban architecture. For some, including the Historic Places Trust, St Mary’s removal was a pragmatic resolution of a self-evidently unsatisfactory arrangement, justified in a property-focused culture as a correction of its original location1. For others the removal was seen as an act of sacrilege that cut to the heart of traditions that inscribe buildings and Architecture with meaning by their association with place and time2. This perception translates the general characteristics of New Zealand building – of a short history, often disputed; of a cultural resistance to the recognition of obsolescence; of light-weight constructions that are tenuously fixed to the ground ; of a deeply conservative social order that commits the concept of ‘property’ to an extreme model of private ownership – which collectively suggest a profound attachment to temporary-ness. The practice creates a culture in which ‘place’ is uncertain, and in which the city as a representation of our built history lacks authenticity. This paper suggests that the tradition of treating buildings as a conditional property of history should be examined as a necessary part of a new discourse that develops more effective approaches to conservation. 1 Jane Bellamy. Quarter of a century since St Mary's move. East and Bays Courier, 7 March 2007; 8. 2 Nigel Wilson. St Mary's and the Cathedral. Auckland Metro, 1982; 2: 88-91.

Proceedings of the Society of Architectural Historians, Australia and New Zealand: 31, Translation, edited by Christoph Schnoor is licensed under a Creative Commons AttributionNonCommercial 4.0 International License