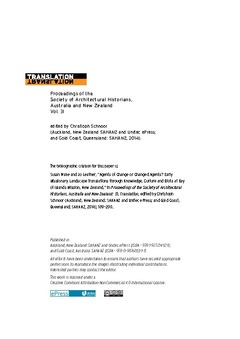 Transfer implies moving knowledge or objects through space or time – inevitably creating change in the translation process. Vectors facilitate transfer or spread – either as organisms that are agents of change or as a force of influence. In the Bay of Islands, the Maori village of Rangihoua was the location of the first permanent European settlement in Aotearoa, New Zealand (Oihi Mission). Lay missionaries sent out by the Church Missionary Service were selected firstly for their transferable skills, vital in the establishment of a colonial society. 200 years on, excavation of Mission sites, such as the one at Oihi show it is peppered with the translation of these events. For example, building evidence (including the first school in New Zealand), remnant cropping areas and gardens (including Maori agricultural ditches, heritage rose varieties), and a legacy of non-native species introduced by early settlers. Crowning the site is a memorial to Reverend Samuel Marsden who conducted the first Christian service on New Zealand soil in 1814, with translation by Ruatara, the local Maori chief. With the bicentennial approaching it is an ideal time to consider the role of missionaries, notably James Shepherd, as a vector of alien knowledge, culture and species, in translating the landscape of this site. The paper will also investigate how the site conditions may have resisted or altered the colonial efforts, in a re-translation of the translator. In summary, using primary data from sites and accounts of the life of James Shepherd the authors will construct a history of early missionary life, as viewed through the competing lenses of colonial and indigenous influence on landscape morphology and practices.