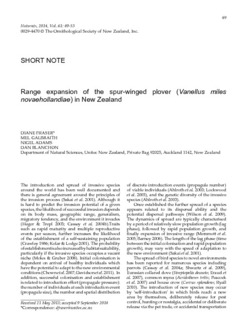 The southern subspecies of the Australian masked lapwing, known in New Zealand as the spur-winged plover (Vanellus miles novaehollandiae), self-introduced into New Zealand as early as 1886 (Oliver 1974). However, the first breeding pair was not recorded until 1932 (Barlow 1972). The species is currently classed as ‘native’ as its arrival in New Zealand predates the establishment of the Wildlife Act 1953 and it is not regarded as an invasive species. However, over the last 70 years the species has spread progressively up the length of the South Island and across the whole of the North Island of New Zealand. In this paper we describe the spread of this species across New Zealand over the last 70 years and analyse the factors associated with its establishment and spread.