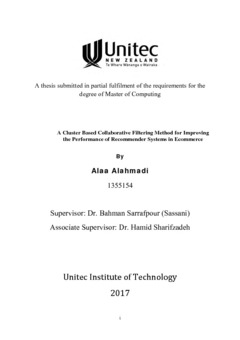 Alahmadi, A. (2017) A cluster based collaborative filtering method for improving the performance of recommender systems in ecommerce. An unpublished thesis submitted in partial fulfilment of the requirements for the degree of Master of Computing, Unitec Institute of Technology, New Zealand.

Rapid growth of E-commerce has made a huge number of products and services accessible to the users. The vast variety of options makes it difficult for the users to finalize their decisions. Recommender systems aim at offering the most suitable items to the users. To do this, recommender systems use data about user’s behaviour and interest (in the past) and characteristics of items. In addition to the data, recommender systems employ machine learning algorithms to build sophisticated models to predict the user’s behaviour in the future. In this thesis, two new methods are proposed for recommender systems both of which consist of two phases: offline and online. In the offline phase, users are clustered based on their similarities; and in the online phase, items which are interesting for a user’s cluster members are recommended to that user. The first proposed method, CFGA, is based on collaborative filtering technique, uses genetic algorithm to cluster users in the offline phase. The fitness function takes into account the users’ ratings and rating times. In the online phase, the ratings of the target user for each item is calculated from the ratings of his or her cluster members to that item. Items with ratings above a threshold are considered interesting for the user and are recommended to him or her. The method is evaluated with two data sets from Movielens for which experimental results show that CFGA is more accurate than several existing recommendation methods. However, there are a couple of existing methods that outperform CFGA. The second method is a hybrid method which combines collaborative filtering and demographic recommendation algorithms. Similarly to CFGA, the second method uses genetic algorithm for clustering users. However, the fitness function, in addition to users’ ratings, incorporates demographic information about users (age, occupation, and sex). Experimental results show that the hybrid method outperforms not only CFGA, but also all existing similar methods.