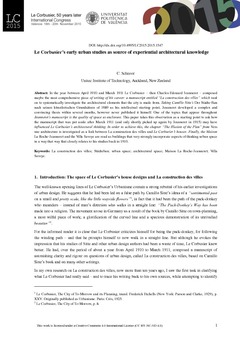 In the year between April 1910 and March 1911 Le Corbusier – then Charles-Edouard Jeanneret – composed maybe the most comprehensive piece of writing of his career: a manuscript entitled “La construction des villes” which took on to systematically investigate the architectural elements that the city is made from. Taking Camillo Sitte’s Der Städte-Bau nach seinen künstlerischen Grundsätzen of 1889 as his intellectual starting point, Jeanneret developed a complex and convincing thesis within several months, however never published it himself. One of the topics that appear throughout Jeanneret’s manuscript is the quality of space as enclosure. This paper takes this observation as a starting point to ask how the manuscript that was put aside after March 1911 (and only shortly picked up again by Jeanneret in 1915) may have influenced Le Corbusier’s architectural thinking. In order to achieve this, the chapter “The Illusion of the Plan” from Versune architecture is investigated as a link between La construction des villes and Le Corbusier’s houses. Finally, the Maison La Roche-Jeanneret and the Villa Savoye are read as buildings that very strongly incorporate aspects of thinking urban space in a way that way that closely relates to his studies back in 1910.

This work is licensed under a Creative Commons 4.0 International License (CC BY-NC-ND 4.0)