"Design" and "Design" the verb, noun, prefix and suffix : architecture studio teaching as an epitome of design methodologies 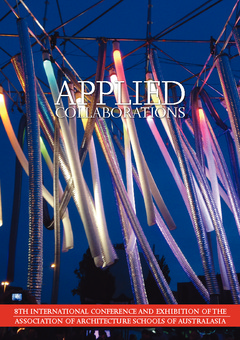 This paper critiques three case studies of architectural large pre-fabrication collaborative projects in Christchurch; Lux City 2012/Canterbury Tales 2013/City Up’s 2014, from students from Unitec Department of Architecture. These were the student responses to FESTA’s (Festival of Transitional Architecture) call for projects to reinvigorate the city centre after the earthquakes of 2010 and 2011, for a 24-hour period over Labour Weekend. The aim is to identify the use of design processes within the three case studies and with the aspiration to conclude that design processes are an integral part of an architect’s arsenal of skills; Architectural Education has embedded design methodologies (First Insight/Empathy, Preparation, Incubation, Illumination, Verification) within its core studio teaching, these case studies being directed and produced within BAS second year studio, and which characterize/personify these processes. The English language (Anglo-Saxon) does not delineate the difference between “Design” as a domain and design as a process or methodology. Are we then confusing architectural students when we talk of “the design” (i.e. the scheme or programme) or “design” (the process through which one creates an architectural proposition) and how can we resolve this? Or perhaps it is not necessary? I hope to illustrate that the design process is epitomised within architectural practice/education. According to Professor Sam Bucolo of Sydney’s University of Technology: “design should not be a noun but a verb, he says. ‘It’s a process and quite a rigorous process.’ So how do you think like a designer? “Design thinkers” start with empathy (…) ‘It’s a people-first approach.’ Design thinking is also integrative; designers try to draw as many threads together as possible” (…)2